It's almost surreal to think five years ago today I started this blog.  It was also the day I was diagnosed with Multiple Sclerosis.  As poor as my memory is these days, October 22, 2008 is a date I will never forget.

It's important to realize I had MS for years before I was actually diagnosed.  They know I've had it since at least 2005 if not longer.  I strongly suspect it became active after the birth of my son in 2002.  Before I was diagnosed, I spent years "sick".  I lost my job, I lost my house, and I even lost my car.  I was forced to live in a horrible ghetto apartment with my two young children and try to function despite feeling like an emotional and physical wreck.  I spent years with doctors, family, and friends accusing me of "faking it" or that my illness "was all in my head".  Essentially, most people around me thought I was a lazy hypochondriac with developing psychological issues.  To put it bluntly- I was in hell.

Then in October 2008, I woke up one morning and was unable to see.  I had complete double vision, and if you've never experienced this before, with both eyes open you may as well be blind.  I stumbled into the living room and closed my eyes, thinking maybe if I just gave it a moment it would go away.  No luck.  Starting to feel panicked, I woke my then husband and said "I need you to drive the kids to school today and then I need you to take me to the ER.  I can't see".

At the ER, they assumed I'd had a stroke.  They did a CT scan, x-rays, blood work, and a battery of neurological tests.  All the tests came back negative and I was essentially released with a shoulder shrug and told to see an Ophthalmologist.  That same night, I saw one and he did a thorough examination of my eyes.  He found that nothing was physically wrong with my eyes but my optic nerves were inflamed and asked "Have you ever been tested for MS?"  I didn't even know what MS was but he advised I schedule an MRI to be tested for it immediately.

That night I went home and Googled MS and learned it stood for Multiple Sclerosis.  As I sat and read about this disease, I felt my heart sink.  I read for hours before finally getting up and going to my then husband in tears saying "Oh my God, this is what's been wrong with me for all these years.  I have Multiple Sclerosis".

Later that week, I got my very first MRI.  The week after, I was diagnosed with MS.

Why do I see the anniversary of my MS diagnosis as a good thing?  Because the enemy I was battling finally had a name.  After years of being sick and miserable, I knew what was wrong with me and I knew how to best fight it.  I was no longer the unstable, lazy hypochondriac and there was a sense of satisfaction in being able to say to the critics "You were right, it is all in my head.  I have lesions all over my brain".  Being diagnosed with Multiple Sclerosis was the first (necessary) step in regaining control of my life and health.

In the five years since my diagnosis anniversary my life has changed drastically.  I divorced the parasite I was married to back then (thank God!), I quit smoking, I bought a house, I lost over 230 pounds, and even found love with a wonderful man.  Do I still struggle?  Of course I do!  But I choose not to focus on what I can't do and rather focus on all the immense blessings in my life.  Blessings I wouldn't have I wasn't diagnosed with MS and given the tools I needed to fight the MonSter inside of me.

So, Happy Diagnosis Anniversary to me!! 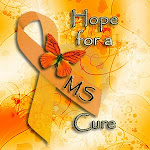 Mis
Michigan, United States
Just your average 41 year old woman. My hope is that this blog will not only help keep those close to me updated on how I'm doing, but give me a place to process my emotions. Maybe one day someone else newly diagnosed with MS will stumble onto this, and reading my journey will help them see they're not alone. If nothing else, maybe this blog will help educate people to what MS really is and how it effects not only those with it- but the lives of those that love them.